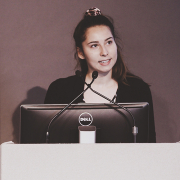 Zoe Skinner, Vet Futures Student Ambassador, Innovation Chair and fourth year student at Nottingham, introduced the “What’s Your Big Idea?” innovation competition. Explaining the rationale, she said that, as students, it was easy to focus solely on what was being taught as part of the curriculum, rather than to consider how new technology could transform the career that students hoped to pursue.

The innovation competition, which had been launched in collaboration with ViVet, encourages students to submit ideas for new veterinary-related technologies. At the symposium, three finalist teams pitched their ideas, “Dragons’ Den” style, to a panel of potential “investors”.

First up was Madison Hewitson, a final-year vet student at Nottingham, with her ‘Inno-Vet’ app entry. She believed that the app could offer a technological solution to problems such as poor owner compliance, miscommunication and poor mental wellbeing in members of the profession. Owners could use her app to receive daily tips and advice on the care of their pets, book appointments, request repeat prescriptions and pay bills. The app would also allow them to create a customisable profile for their animal and share information with their vet, such as their pet’s heart rate, respiratory rate, urinary output and water intake. In turn, vets could share treatment plans and further information about any disease diagnosed or discussed during a consultation.

Discussing the funding needed to develop the app, Ms Hewitson said that the average cost of app development was between £20,000 and £50,000. The app would also need to be trialled by vets and clients and developed in light of their feedback to create a viable product suitable for release onto a general market. Its success would be measured by how many users it achieved, client and veterinary satisfaction, and improved animal health and welfare.

Following her presentation, Ms Hewitson was asked about what she saw as the biggest risks in the app development process and what measures she would take to mitigate them.

She replied that the biggest risk would be the development of competitor apps that offered similar functions. However, she believed that by offering informative material in a user-friendly manner, she could maintain engagement with her customer base.

The second pitch was made by Rohilla Rogers and Lauren Sweeney, final year veterinary nursing students at Bristol, with their “Helping With Whelping” app. Their app aimed to reduce the number of puppies that died before weaning by giving breeders easy access to advice and guidance on things such as preparing for whelping, what a normal birth looked like, what to do when things went wrong, puppy CPR and postnatal care. Most importantly, their app would offer a ‘pregnancy tracker’ allowing breeders to monitor whether their dog’s pregnancy was progressing normally.

The app was intended to be all encompassing, they said, and their initial market research had suggested that it would be valuable and well received. The overall aim was to improve the relationship between vets and breeders, offering a more interactive means of communication.

Asked what their start-up costs might be, they replied that, realistically, the figure would be between £50,000 and £70,000 to set up the app with all the information that they would like to include in it.

Christina Ratcliffe and Ana Almeida-Warren, vet students at Liverpool, made the final pitch. They described ‘Vet Case’, an app aimed at veterinary students. Noting that students often had limited time working on first opinion cases during their time at vet school, they explained that their app offered access to interactive case-based learning. Students could choose a case to work on, following the same process as they would use in practice, but in a non-judgmental environment and with no real-life repercussions from the decisions that they made. The app encouraged critical thinking and a logical approach to problem solving, and encompassed real-life aspects such as the cost of the treatment options selected. The aim was to help increase students’ confidence in their decision-making abilities and reflect on what they had learned.

Ultimately, they hoped that the app would be useful to other audiences such as vets returning to practice after career breaks. It could also be expanded to include cases suitable for CPD. They suggested that the app could make a difference to vet schools in developing countries, saying that they would provide free access to Vet Case to empower students in situations where educational resources were limited.

They described how they would develop the app, saying that one option for building the bank of cases that would be needed could be by offering free access to the students of various universities. In return, the universities would submit and validate cases for the app. Once the user base had grown sufficiently, they believed that the app would attract companies to sponsor cases and provide advertising.

Asked how they would get the vet schools on board, they highlighted the potential of the app to help universities to get feedback on the courses they offered, see what areas students were doing well in, and not so well, in, and provide tools for teaching.

After the three presentations, the judges picked Christina Ratcliffe and Ana Almeida-Warren and Vet Case as the winning innovation. Runners up were Rohilla Rogers and Lauren Sweeney.

Privacy notice: This site uses cookies, which we use to improve your experience, and not for marketing purposes. If you continue we'll assume you are happy to receive them. Read our cookie policy
Kathy Turner