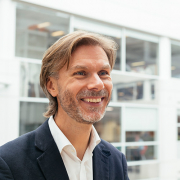 Accelerating innovation in the NHS

Professor Tony Young, National Clinical Lead for Innovation at NHS England, had recorded a short video for the ViVet Innovation Symposium to describe how innovation and entrepreneurship in healthcare is now being encouraged within the NHS. He explained that, until recently, the NHS had had no system to support staff who had ideas that could benefit patient care and, as a result, many frontline staff had left to develop their ideas outside of the NHS.

The NHS Clinical Entrepreneur Programme was launched three years ago, with the vision of equipping frontline staff with skills, knowledge and experience from the commercial and start-up sector so that they could help address some of the “grand challenges” facing healthcare, either through setting up a business, social enterprise or charitable enterprise, or by being an “intrepreneur” – someone who worked within the NHS to bring their commercial knowledge to influence change.

The programme is now three years old, and has become the World’s largest workforce development programme in healthcare. More than 500 entrepreneurs have enrolled on it, including 360 frontline clinicians. It has given rise to 175 start-up companies, which have raised over £164 million in funding, mainly from the private sector, and impacted 17 million patients and professionals as well as generating over half a billion social media impressions.

He also reported that 106 clinicians who had left the health service have returned to it as a result of the programme. “We have turned a brain drain into a brain gain for the health service,” he said. “But all we’ve done is given people permission to be entrepreneurs within healthcare.”

There have been some “amazing” start-ups emerging from the programme, ranging from back office technologies, through to virtual holographic avatars that can provide medical advice in remote war zones. There is a lot of work going on in the field of artificial intelligence (AI), including the creation of an AI patient that responds to a doctor’s questions.

“Technology has really changed and transformed everything,” he said, “and if we expect our universities, hospitals or the centre of government to come up with the ideas that will change healthcare, I think we’re going to be waiting a long time.”

Including entrepreneurs, start-ups, frontline staff and patients in redesigning the healthcare system will bring new thinking and new actions to healthcare, he said. The NHS Clinical Entrepreneur Programme was willing to share its thinking with the RCVS to see how veterinary medicine might benefit. “We realise we need to bring everyone to the centre of healthcare if we are going to bring all the thinking we need to try and effect change and tackle the grand challenges that we face.”

Two entrepreneurs from the NHS programme then gave presentations on the ideas that they had developed into start-up companies. Dr Mark Martin, a trainee GP and founder of Set Points Health, explained that his innovation is a metabolic urine test that allows individuals to learn how their body responds to diet, exercise and medication. He said that being an NHS Clinical Entrepreneur had given him a “badge of credibility” while he was developing the test – meaning that when he approached people to talk about it, they listened to him.

Initially, he had set out to find data that could be used to design a metabolic disease prevention programme. He had partnered with a company that made what he described as “a bench top MRI scanner, about the size of a microwave” and had discovered that, by running a urine sample in a test tube, it was possible to tell the difference between an individual with diabetes and a healthy individual. This generated data to use in developing a programme to help people in day-to-day clinical practice. He “did a bit of research” and found out that, by looking at very specific amino acids and metabolites in urine, it is possible to detect diabetes many years before sugar levels begin to rise.

He wants to help people to manage their metabolic health and give them a tool that could help them prevent diabetes and other metabolic diseases. This would ease the long-term burden on the NHS. “The major challenge the NHS has today is keeping people who are living longer, healthier for longer,” he said. With medicine “moving closer to the home”, particularly when it comes to dealing with chronic disease, the aim is to empower patients to manage themselves.

To evaluate whether people would engage with his product, he developed a self-test kit and investigated four potential target markets for the test – the NHS, pharma, health insurance companies and the health and wellness industry. From this evaluation, he identified the health and wellness industry as the best entry route to the market. He is now working with health clubs to develop tools that will encourage people who are interested in their own health and wellbeing to use the test to give them an insight into their metabolic health and how their body responds to diet, etc. The ultimate aim is to develop a test that detects metabolic syndrome – a combination of diseases.

The second NHS Clinical Entrepreneur to speak was Dr Tom Oakley, a radiologist by background who is now the CEO of a public limited company that has floated on the London Stock Exchange. He has raised £2 million and employed 12 people to help him develop his product.

He explained that, as a radiologist, his biggest problem with the healthcare system had been that it was not possible to share medical images easily and that communication between clinical colleagues in different locations was difficult. “If you’re having a stroke, even in the centre of London, and you have to go down the road to another hospital for a thrombectomy, it can take up to three hours for us to exchange your images from the hospital you were at to the hospital you’re going to,” he said.

In response, he had created Bleepa, a picture archiving and communication system (PACS) that operated on a mobile phone. “You can access any medical image – MRI, CT, plain film studies, even fluoro – from wherever you are in the world,” he said.

The system also allows clinicians to communicate through instant messaging. This means that a clinician can highlight a feature of interest on a scan, for example, and ask colleagues about it.

His company is now exploring whether patients might be interested in accessing the system, which would allow them to keep copies of their scans. “Quite useful if you’re overseas and suddenly you’re taken ill and your CTs from the UK can be seen by clinicians in the States,” he suggested.

Other potential developments include incorporating AI imaging tools into the platform to help non-specialists interpret an image while waiting for a specialist opinion.

He wondered if there might be potential for the system to be used in the veterinary field, asking if members of the audience would benefit from being able to share images and whether owners might want their pets’ images.

One audience member commented that issues of liability and indemnity might arise if a vet outside the RCVS’s jurisdiction – for example, living overseas – used this type of technology to comment on images from a UK case and a problem arose, and suggested that this was a “live sandbox issue that we should perhaps be thinking about now”. “The tech’s the easy bit, right?” replied Dr Oakley, “It’s all the bits that go around it…”

He reported that his company runs sandboxes for testing and regulating AI and is evaluating some of this work with NICE and the Health Research Authority. “We will build a sandbox of 10,000 CTs and deploy the AI tool into it and we will see what the outcome is compared to radiology reports. So you get some real-world analysis of these types of tools,” he concluded.

Privacy notice: This site uses cookies, which we use to improve your experience, and not for marketing purposes. If you continue we'll assume you are happy to receive them. Read our cookie policy
Chris Gush and Lori Teller DVM