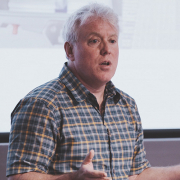 Iain MacLaren-Lee of Oxford Nanopore Technologies spoke at the inaugural ViVet Innovation Symposium at The Shard in London in 2017. At that event, he had shown delegates a pocket-sized genome sequencer that the company had developed and he returned to the 2019 symposium to explain how the technology has evolved since then.

He began by describing how he himself had been using the genome sequencer. “I’m going to take a massive risk with an audience of vets by starting to talk about crops,” he commented. He explained that the sequencer has been used to detect the presence of viruses that kill cassava. Cassava is a staple crop that feeds about 800 million people globally, but it is blighted by two viruses –mosaic virus affects the leaves, while the other produces brown streak disease in the tubers. The genome sequencer has enabled detection of the virus in a cassava crop early in the production cycle (it takes nine months to complete a cassava harvest), allowing the farmer to destroy the affected crop and replant with a resistant variety, vastly improving crop yield.

Noting that “vets don’t do crops”, he went on to describe how the technology has been applied to animal diseases.

A group in Germany had used the sequencer to rapidly serotype foot-and-mouth disease (FMD) virus in a field setting. Serotyping FMD virus is important because available vaccines are not cross protective, therefore, the serotype must be known to determine which vaccine will be effective.

Researchers in the USA had used the technology to detect influenza viruses in pigs at a show, with the aim of determining whether any carried strains that had the potential to cause human disease. Again, all the testing had been carried out in situ, and, on the basis of their findings, and with knowledge of previous influenza outbreaks that had arisen in pigs, the researchers were able to identify a strain that could putatively cause a human outbreak. Ultimately, 18 people developed influenza caused by this strain: while this was only a small outbreak, the researchers had shown that it was possible to predict an outbreak in advance of it occurring. Early prediction would allow the authorities time to prepare a vaccine against the causative strain. “Had there been a massive outbreak, they would have saved eight weeks – seen it coming, sending the data, having that vaccine ready to go,” he said.

In dogs, the technology had been used to detect canine distemper virus, while in poultry it had been used to differentiate between 19 different strains of Newcastle disease virus, helping to inform vaccination programmes and track disease spread.

In all these examples, the researchers had been looking for a specific pathogen. However, the technology could also be used for screening animals to determine what pathogens they were carrying and then use this knowledge to inform management decisions.

He then explained how the technology worked. A protein pore was embedded in a synthetic membrane and an electrical current was passed through it. Anything that entered the pore perturbed the current; this perturbation could be measured and linked back to the molecules causing the perturbation. When a single DNA strand was passed through the pore, the bases within the pore at any one time caused complex disruption of the current. It was possible to decode the disruption to identify the sequence of bases in the DNA strand. The sequencer used thousands of pores simultaneously.

“That’s a fundamentally different way of reading DNA than all previous generations of DNA-reading technology,” he said.

He highlighted the key advantages of the technology. First, if a complete virus genome is present in a DNA strand, it is possible to sequence the whole genome in one go. Being able to read long sequences of DNA (the company’s current record for a continuous read was 2.3 million bases) allows determination of very complex genomes and visualisation of parts of the genome that were not being seen using previous technology. “It simplifies genomic analysis having this ability to read DNA in very, very long stretches,” he said. “It allows us to see parts of the genomes that we couldn’t possibly see [before].”

The portability of the technology is also an advantage – all the equipment required to perform the genomic analysis fits into a suitcase, meaning that (as he had shown) it could be used in the field – it had even been taken up to the International Space Station.

The speed of the device means that results can be achieved rapidly and the sequencer also works with RNA, which is particularly useful for many viruses.

Looking to the future, Dr MacLaren-Lee said that work was focusing on reducing the amount of equipment required to support the sequencer by automating the process of creating a sample suitable for analysis.

Privacy notice: This site uses cookies, which we use to improve your experience, and not for marketing purposes. If you continue we'll assume you are happy to receive them. Read our cookie policy
Dr Jasmeet Kaler