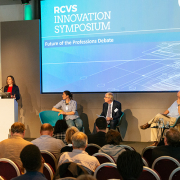 “In order to thrive the veterinary professions must become truly ‘customer-centric’.”

This was the proposition for debate at the ViVet Innovation Symposium. Chaired by Dr George Gunn, Founder and CEO of Stonehaven Consulting, the debate heard two speakers support the proposition and two oppose it. An initial vote indicated that a majority of symposium delegates supported the proposition.

The first speaker was Dr Gudrun Ravetz, a Past-President of the BVA. Arguing in support of the motion, she said that being customer-centric meant better understanding the needs of clients and, in so doing, being better able to treat animals under veterinary care and ensure their welfare. “We should be asking the client…what is your need? Where do you want to go? What I can do for you to help enable you as a customer?” she said. “That is being customer-centric.”

There were a number of ways in which to assess whether the professions were thriving, she suggested. These included whether workplaces and businesses were economically viable and whether members of the veterinary team were professionally and personally viable – that is, they were fulfilled in their roles and worked somewhere with a positive approach.

She emphasised the importance of treating clients as individuals and understanding that different clients had different needs. She cited examples of situations – pet vaccinations and diet/nutrition – where she believed that better understanding customer needs would enable better welfare.

But, she said, being customer-centric did not mean “blindly doing anything that the customer wants”, particularly if what the customer wanted was not in the interests of their animal’s welfare. However, unless veterinary professionals attempted to understand the reasoning behind these wants, they would alienate customers to the detriment of animal welfare.

“Ultimately, I would argue that being customer-centric allows a welfare-focused veterinary profession to thrive,” she concluded.

Opposing the motion, Iain Richards, an independent veterinary consultant, considered the potential impact of being highly customer-centric on the lives of veterinary professionals. He began by considering what the “gold standard” of being customer-centric might be, suggesting that it might be the level of service offered by a top hotel, where customers could have whatever they wanted, whenever they wanted it.

“If we take that ‘whenever they want it’ into the veterinary profession, that means the vet being available at all times. With the level of mental [ill] health that we’ve got, is that something that we truly want?” he asked.

He was also concerned about the impact on clinical judgement: “To be customer-centric, we focus on the customer’s needs. It’s very difficult not to get drawn into the customer’s desires – and that is hard territory.”

The NHS was, he suggested, a good example of a customer-centric organisation, particularly when it came to patient focus groups. These were “a great idea”, bringing patients together to talk about their experiences and what could improve their experience of the healthcare system. However, members of such focus groups were often “single issue” people, “there to complain about their one thing that affected just them…they don’t look at the whole issue,” he said.

However, his biggest problem with the proposition was the use of the word “customer”. He believed that by becoming too customer-centric, the veterinary professions would turn their work into a commodity and in so doing, would undermine the trust that the public retained in them.

After hearing one speaker for the proposition, and one against, the debate was opened to the floor. There was discussion of what “customer-centric” actually meant; whether there was a difference between being customer-centric and involving clients in joint decision making; and whether being customer-centric extended to all aspects of veterinary practice. There was also discussion of whether becoming more customer-centric would encourage more people to consult vets. Another point raised was that, at times, there would be situations where what the customer wanted would not be in the best interests of their animal or society at large. In response to this, Dr Ravetz acknowledged that there would always be situations where societal good would override the wants of the customer.

Following the discussion, symposium delegates heard from two more speakers, one supporting the proposition, one opposing it.

Speaking in support, Ebony Escalona, the founder of Vets: Stay, Go, Diversify, argued that, if vets were not serving their customers, they were serving others: “By that I mean that, as a horse vet, if I’m really not being customer-centric, they will spend more time with their homeopath, their reiki person and everyone else. If I am not serving them and listening to them, Someone else will be.”

Opposing the proposition, Lynne Hill, a Past-President of the RCVS, said that, while she felt it was impossible to be a vet unless one was customer-centric, as well as considering customers, employers also had to consider the people they employed. She believed that if veterinary professionals did their best for the animal in front of them, their clients would be happy, even if the professional did not do exactly what the client wanted. “It’s very much about the pet first –doing the right thing,” she said. “For me, you look after the pet, you look after the client, and actually that helps your staff and your teams, whether it’s the nurses, the receptionists, or the vets. Because, if you’re all headed to do the right thing for the pet, the right thing for the client, your teams actually are extremely happy in where they work – and if they’re happy in where they work, my goodness, does your business thrive.”

She believed that it was important to always act in the best interests of the animal, and the professions could not move entirely down the route of what clients wanted, they got. Care was needed in how the professions moved forward to ensure the welfare of those who worked within them.

“We’ve got a lot of questions to answer in how we should go forward,’ she said. “We’ve got to remember that, yes, the client is always the client, they’re the ones that pay your wages in the end, but they’re not always right…We can be successful in businesses…by not just listening to the customer, but listening to our staff and listening to the animals that we treat.”

A final vote was taken after the speakers had concluded. While a majority of the delegates remained in support of the proposition, some had changed their opinion, increasing the number opposing it.

Privacy notice: This site uses cookies, which we use to improve your experience, and not for marketing purposes. If you continue we'll assume you are happy to receive them. Read our cookie policy
Guen Bradbury MRCVS & Greg Dickens MRCVS