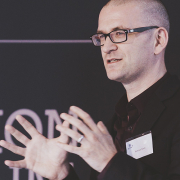 Can artificial intelligence (AI) add value in agriculture? This was the question addressed by Dr Matthew Smith of Microsoft Digital.

AI, he said, has potential applications in many areas within agriculture, whether that is helping to increase productivity and profit, or saving farmers time and allowing them to get more sleep.

However, while there is great potential, there is still a need to test and trial technology “on the ground” and “in the real system”. “It’s no longer trying to figure out ‘oh, can we address this scientific question?’, it’s, ‘right, the scientific technology questions are answered enough, what’s the new business scenario that we can trial where we can measure “are you getting more sleep”, or “are you happier” or “are the animals more healthy”?’” he said.

There is now a thriving pipeline of focusing on this in agriculture. Once the value of an innovation can be identified – for example, using pedometers on cows to monitor for the onset of oestrus, thus saving farmers time and allowing artificial insemination to be performed at the optimal time to maximise the likelihood of a female calf – then the technology can be improved to add greater value over time.

Technology is developing so quickly that the ability to address and realise value from it is changing all the time. However, the key focus of his work is in identifying the mechanism through which the value of the technology can be realised for all participants and then working to achieve this. The aim is to get to a point where many capabilities are available “off the shelf”.

However, he warned, “We also need to be very careful about the implementation of all manners of AI without thinking in terms of the overall business consequences”, and so on the ground testing is needed to identify additional costs and risks.

Generally, when people think of AI, they think of any situation where a computer does something “smart” in response to data input, he said. But it is important to establish what a person actually means by AI when they consider using it to solve problems or improve existing processes. “Are you talking about deep learning and needing a million images before we even get started, or is it basically an expert system that has all the possible symptoms on the one side and all the possible things it could be on the other side and it’s just doing a loop up?”

He described how AI can be used to predict disease and the various types of analysis involved, and also stressed the importance of identifying and testing scenarios to see if technology actually did add value.

He went on to discuss some of the problems that need to be tackled when applying AI in agriculture. One such problem is how to integrate multiple systems to produce “smart rural communities”. “We’re getting an awful lot of ‘smartness’, an awful lot of data analytics, an awful lot of apps and things like that for use not just in the farm, and not just with the veterinary practitioner going to the farm, but in the whole rural community – in the farmhouse, in the bus service, in the flood prevention systems. We need to start thinking about how we support smart rural communities because all the fundamental capabilities we need to enable the use of these systems would be helped an awful lot if it was far less laborious to be able to connect our systems and get that information.”

Another area to consider is how to support the exchange, storage and analysis of “agri-data”, so that farmers can benefit from the information they are collecting. There is a need for more organisations to build the analytics capacity, not just the technology itself, he said, so that the data captured by technology can be analysed and acted on. There is also a need for farms to test and demonstrate the value of new technology.

Can farmers be enabled to have affordable digital agricultural solutions given the complications on farms – such as no connectivity or power sources in fields – to allow the collected data to be brought together to give a unified picture of whatever is being studied? He described the development of FarmBeats, software that can used in sensors on farms and can communicate in a variety of ways to send data over large distances. A data collection system also has to manage its power effectively – and FarmBeats makes it possible for systems to learn to collect and send or receive data efficiently so as to conserve the battery of a sensor. Another element is the inclusion of machine learning within the data collection systems themselves to increase precision.

Ultimately, he explained, the big concept is to get to the “digital twin” – a digital representation of a real-world thing.

Agricultural communities of the future will need help in working with the explosion of analytical services as well as the myriad datasets that will be available, he said. It is unrealistic to expect them to continue to add apps and technologies without some higher level of organisation on top. There will be opportunities for agricultural communities to suggest what solutions they require and then further opportunities for organisations to trial such solutions.

Privacy notice: This site uses cookies, which we use to improve your experience, and not for marketing purposes. If you continue we'll assume you are happy to receive them. Read our cookie policy
Collette Philip