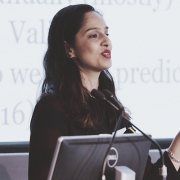 Application of precision medicine, AI, genomics and the use of data for animal health and welfare

Dr Jasmeet Kaler, of the School of Veterinary Medicine and Science at the University of Nottingham, discussed how information derived from sensors and other sources can be used to develop machine learning algorithms and artificial intelligence (AI) that can be applied across animal health, welfare and production.

She began by describing some of the challenges facing livestock production at the present time, including increasing global food demand and the need to produce more food with limited resources and zero net emissions. Key societal challenges, such as antimicrobial use and resistance, also influence farming methods and food production.

Understanding disease, she said, relies on reporting and recording information. Such information is usually collected manually and intermittently, and can be biased. Is data collected this way really valid, she asked, and do vets really predict and prevent disease on farms?

In contrast, precision livestock farming refers to managing livestock by collecting data continuously, automatically and in real time across areas of production, health and welfare. “This then gives us a great opportunity to use various machine learning tools, AI, and different platforms where we can start to make more sense of that data,” she said.

So what is driving the increasing use of technology for precision livestock farming? There are three main factors – the decreasing cost of the technology required, increasing computational power and an increase in the parameters that can be measured.

She went on to discuss potential applications of precision livestock farming. These include ensuring efficient use of resources, such as precision feeding or precision grazing to ensure that pasture is used in an optimal way. “That’s been happening,” she said. Another application is diagnosing disease and using sensors to predict disease occurrence early and provide objective information on animal health and welfare. Sensors can also be used to inform the management of animals to prevent disease, for example, by helping to monitor stocking density.

Other potential uses include reducing the workload of animal keepers, certification and traceability, and phenotyping.

She also suggested that using sensors to collect information could help strengthen the relationship between farmers and vets by providing data that would help vets add value to farms.

She then described various pieces of research that had used sensor data to help understand animal health and welfare. For example, she had been interested in whether it was possible to use sensors to detect behaviour in sheep that was characteristic of lameness. “One peculiar thing about lame sheep is a head nod; they have this head nod as they are walking. And I was thinking, okay, we could really pick that up with a sensor,” she said.

“The concept was very simple,” she added. “We collect the data, we pre-process it, we develop a machine learning algorithm, we then implement on the chip…we validate it and if we need further testing, we do it.”

However, there had been a number of technical challenges to overcome, including where a sensor should be placed on a sheep to detect the head nod, the battery life of the sensor, and making it suitable for use in an extensive environment.

She had used a pattern matching engine (PME) to classify data collected from the sensor into different categories of activity. To do this, the data from the accelerometer had been matched to what the sheep was doing and then an algorithm had been built to classify different types of behaviour, such as standing, walking, lying, etc. Initially, she had thought that it would only be possible to detect lameness when a sheep was walking, but the algorithm was ultimately able to classify lame sheep even when they were standing still or lying down.

This study had used only one sensor, but it is also possible to use data from multiple sensors and fuse it together. In another study, she was trying to pool data from multiple sources to a central hub to make it easier for farmers to predict events such as calving or disease. One algorithm could now predict calving up to five days in advance.

Technology could give novel insights too, she said. There is a tendency to think about groups of animals rather than individuals, and to think of variability within a group as “noise”. But this variability could be very important – for example, there is a lot of variability in the amount of time lame and non-lame sheep spend grazing, so it is not possible to look at data from one single time period and identify which sheep are lame. “This is an exciting field in terms of insights,” she said.

A new project is looking at linking data from multiple sensors on health, behaviour, social networks, physiology, pathogens and immune function to detect positive measures of welfare. Another new project is using machine learning and AI to look for biomarkers of antimicrobial resistance.

There are, however, barriers to the adoption of such technology, including concerns about the reliability of technology, the ownership of data and data security, and concerns that farmers will become less skilled as a result of technology. There is also a lot of information being generated, but sometimes it is not usable. Systems that are currently being used focus on alerting users to problems and do not offer suggestions for potential treatments. Data are being kept in silos, and more interconnected systems are needed. Finally, she said, there are societal concerns about whether precision livestock management might result in greater intensification of farming.

Privacy notice: This site uses cookies, which we use to improve your experience, and not for marketing purposes. If you continue we'll assume you are happy to receive them. Read our cookie policy
Dr Matthew Smith