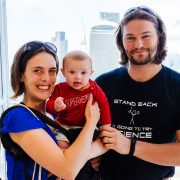 Innovation steps: breaking down the gap between ‘here’ and ‘there’

Guen Bradbury and Greg Dickens described their company, innovation consultancy Innovia Technology, before discussing the steps of innovation and how the profession might move towards the future.

Vets’ understanding of first principles, their skills and knowledge across a range of species and situations, and their problem-solving abilities make them natural innovators, they said.

Focusing on small animal practice, Dr Bradbury described how a future small animal practitioner might use their practice management software system to assess information brought together from a range of different sources and provide a specific, individualised care package for a young puppy.

Examining the potential of telemedicine, she described a remote consultation, conducted by telephone and video, for a dog that had gone lame after chasing a squirrel. She explained how the consultation might be informed by data gathered from the dog’s activity tracker and from gait tracking software.

Surgical procedures could also be aided by technology, she said, describing how a cat’s genomic data gathered when it was a kitten could be used before surgery to help inform its risk of interaction with anaesthetic agents, its risk of coagulation problems and the use of premedication before anaesthesia.

During surgery, strain gauges on needle holders could help the surgeon ensure that the ligatures were tight enough, and warn when they might pull through the tissue.

Post-surgery, technologies such as infra-red and motion capture cameras could be used to alert the surgeon to any problems that might arise during an animal’s recovery. Noise-cancelling technology in recovery kennels could help ensure a less stressful experience for an animal.

Turning to farm animal practice, Dr Dickens described a possible future farm visit. He suggested that the vet of the future might arrive in a self-driving car, meaning he or she would have time to review the farm’s notes on the way and to use trend-tracking software to examine potential problems arising on the farm. They would arrive with a list of potential differential diagnoses already in mind.

He described how, once on the farm, a vet might use augmented reality glasses to view cows with mastitis, record notes from their conversation with the farmer and employ thermographic imaging to see the inflamed quarters. They could also see, projected above each animal, information such as its number, a shortened history and details of any previous veterinary intervention. This could help inform the differential diagnoses. The thermographic imaging could help spot mastitic cows that the farmer was unaware of, meaning that the milking robot could be told to automatically discard the milk from those animals.

Drones were another technology with potential in the farm animal veterinary sector, he said. For example, they could be used to examine areas that would be otherwise inaccessible, such as the roofs and gutters of sheds, or the tops of bedding stores when looking for the root cause of an animal health problem. They could also be used for delivering veterinary medicines directly to the farm.

Data from a sentinel network of practices across the country might be used to highlight emerging disease trends, again helping to inform potential differential diagnoses. A subscription-based payment model for veterinary services would encourage farmers to seek veterinary advice earlier because there would be no extra cost involved in doing so.

Dr Bradbury considered how technology might help out-of-hours practitioners. Considering a late-night call from a worried owner whose cat had been vomiting, she described how, by gathering remote data from the cat’s smart litter tray, the vet could see that the cat had visited the litter tray four times in the previous hour, but had not urinated. They could also see that the cat had gained an appreciable amount of weight since the morning. This would be an emergency case, she said, and the owner would be advised to bring the cat to the practice immediately.

Suggesting that innovation in the veterinary profession could drive three benefits – better animal health and welfare; enhanced owner access to and demand for veterinary services; and improved quality of life for vets – they said that moving towards this future will require innovation in technology, process and regulation.

They believed that vets are able to innovate in all three areas.

Innovation in technology and process are interdependent – it is all very well inventing new technology, but imagination and developing means to take it forward are needed. Likewise, new processes cannot be invented if the technology is not available to support them.

Innovation follows a number of steps, they said, which mirror the steps of the veterinary consultation. First, a need has to be identified (a vet sees an animal with a problem) before investigations are carried out to learn more about that need. A list of possibilities is constructed and evaluated before some of the possibilities are discarded, leaving a range of potential ways to meet the need. The success of the chosen solution is then re-evaluated after a certain time has passed.

Innovation in technology and process are interdependent – it is all very well inventing new technology, but imagination and developing means to take it forward are needed. Likewise, new processes cannot be invented if the technology is not available to support them.

They emphasised that vets need to be at the forefront of veterinary technology and they need to start thinking now about how new technologies could be slotted into practice.

Privacy notice: This site uses cookies, which we use to improve your experience, and not for marketing purposes. If you continue we'll assume you are happy to receive them. Read our cookie policy
Panel debate 1