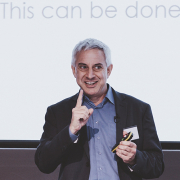 Daniel Berman, lead of the Global Health Team at the innovation foundation Nesta, considered how regulation can be used to stimulate innovation. Nesta, he explained, works with multiple organisations on “everything around innovation”, bringing new technologies to projects for public benefit. He, personally, is involved in health projects, and is running the biggest challenge prize that Nesta offers, the Longitude Prize.

Discussing specific elements of anticipatory regulation, he emphasised the importance of decentralised experimentation. Nesta, he explained, focused on creating safe environments to allow people in multiple locations to work within a framework to test out innovations. “The decentralised aspect of this is unique,” he said, adding, ‘If you think about it, usually regulation is the opposite – it’s a very centralised approach.”

Being proactive and “changing the reality of what the regulation is” is also very important, he commented.

He went on to explain the challenge prizes organised by Nesta, noting that there are currently 13 active prizes. Nesta works to foster communities of innovators and bring them together around a specific problem. The challenge prizes are public competitions, either UK-based or international, that aim to solve a specific problem by inviting people to submit ideas and innovations. “We don’t give awards for doing something clever,” he said, “we give awards with the idea of things getting on to the market.”

Each challenge prize comprises several stages, offering increasing amounts of funding to innovators at each stage, before winning prizes are awarded. He described three challenge prizes in the field of anticipatory regulation and explained that challenge prizes can contribute to regulatory innovation by helping to define goals, encourage transparency and generate public confidence, and by changing regulation as part of the challenge process.

The first prize described was the “Open Up Challenge”, which aims to unlock the power of open banking for consumers. The challenge is to find ways to give people control over their financial data and make managing their businesses easier and more integrated. A bespoke data sandbox has been created, in which a data set has been made available for people to use to innovate with real information in a safe environment, without taking risks.

The second challenge prize described was the “Access to Justice Challenge”, which is aiming to help more people access legal expertise through the use of artificial intelligence (AI). The prize aims to draw in AI innovators from outside the legal services sector and inform their evolving regulatory approach to ethical AI-powered legal services. The issue of liability is absolutely central in this area, he said, as offering poor advice can have negative consequences from a legal perspective. For this reason it is vital that innovation takes place within a safe space.

The final challenge prize – called “Flying High” – is aiming to shape the future of urban drone use in the UK to meet local needs. Nesta has worked with five UK cities to investigate how drones could be used for socially beneficial purposes and the challenges that have to be overcome.

Mr Berman then invited suggestions from the audience for areas within the veterinary field that might benefit from a sandbox approach. Adrian Nelson-Pratt raised the subject of vet-to-client telemedicine, saying that he believed this is “ripe for a sandbox approach”.

David Catlow suggested that exploring how to widen access to veterinary services is an issue that would benefit from the sandbox approach. Telemedicine could play a part in this, he said, but it is not the only solution.

Iain Richards asked how Nesta ensured that the problems the challenge prizes were intended to solve were actually real problems and that they had not been suggested simply because “someone wants to sell something”.

Mr Berman replied that Nesta researched an issue itself, or drew on research done by others, such as academic research or government-commissioned research.

Trevor Hardcastle, chief data scientist at Vet AI, said that it is critically important that there is an evidence-based discussion of which areas of veterinary medicine might benefit from technological solutions. For example, his company has carried out a clinical trial of remote diagnosis of dermatological conditions, and found that remote diagnosis in this particular area is very accurate. “What we really want to do is have this conversation and explore the various domains of veterinary medicine where the regulations could perhaps be relaxed in the face of evidence,” he said, adding that it is important to “map this out”, because the risk in some areas is “just too high”, whereas in other areas it would be more acceptable.

Privacy notice: This site uses cookies, which we use to improve your experience, and not for marketing purposes. If you continue we'll assume you are happy to receive them. Read our cookie policy
Professor Tony Young and clinical entrepreneurs Dr Mark Martin and Dr Tom O...