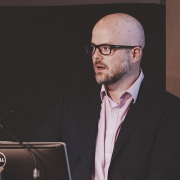 Chris Gush, Chief Executive Director of RCVS Knowledge, gave a brief introduction to the work of the RCVS’s charitable partner, explaining that it offers a range of services to help advance the quality of veterinary care for the benefit of animals, the public and society. These include an open access journal, Veterinary Evidence, the provision of summaries of impactful research studies, a library service, and quality improvement resources such as templates for guidelines, checklists, e-learning and benchmarking data.

He also noted that RCVS Knowledge is responsible for the RCVS historical archive of veterinary literature, documents and artwork.

He was followed by Lori Teller of the Texas A&M College of Veterinary Medicine & Biomedical Sciences, who had been commissioned by RCVS Knowledge to carry out a literature review on telemedicine. She explained that her study, which would be submitted for peer review, had been triggered by the RCVS review of telemedicine and under care, and noted that the UK is not the only country struggling with this issue. “This is a global issue, trying to master what to do with telemedicine,” she commented.

For the literature review, she had read nearly 200 articles from veterinary journals, news magazines, conference proceedings and theses, by 100 authors and dating from 1981 to 2019, with the vast majority being published between 2001 and 2019, with 84 of the articles having been published since 2012.

There is, she said, strong evidence to support the continued use of vet-to-vet teleconsulting and also teleconsulting between vets and other experts. She gave some examples of how teleconsulting has been used in these situations. Some of the studies have shown that teleconsulting is beneficial not only in terms of giving clinically useful information, but also in other ways, such as giving reassurance to practitioners, improving veterinary wellbeing, influencing how individuals practise, offering mentoring between vets, and allowing veterinary input in remote areas or for unusual problems.

Turning to the issue of telemedicine direct to the consumer, she noted that this is the area where “everybody has a lot of angst”, and that the evidence base here is not as extensive, but it is developing.

There is some research around the use of telemedicine for follow-up checks after surgery that shows that the dogs of clients who opt for remote checks are less fearful than dogs brought to the veterinary clinic for checks. Telemedicine is also being used for behavioural work direct to consumer, with good results in treating separation anxiety and issues of aggression, she said. She also cited the example of a military working dog that had become ill at a remote army post where there was no veterinarian available. Telemedicine, overseen by a veterinarian with expertise in treating military dogs, had been used to stabilise the dog before it was evacuated to a base where it could be treated before being sent back to the USA.

She went on to discuss the use of wearable technology and mobile health gadgets. There is a fair amount of evidence-based literature in this area, she said, giving various examples, including phone apps and head halters for horses that took continuous EEGs and monitored seizure activity.

Due to there not being a great deal of literature about telemedicine direct to consumer in the veterinary world, she had evaluated some literature on the use of telemedicine in paediatric medicine, as this is related in that the patients cannot speak for themselves. The paediatric journals indicated that telemedicine can be used to enable more informed decision making, that documentation should be the same as a face-to-face visit, and that many negligence cases in the paediatric arena had arisen when a practitioner had prescribed medication across state lines without examining a patient.

“So that is something that we as veterinarians can learn from,” she suggested.

Paediatric studies have also shown that telemedicine is as reliable as hands-on examination in assessing high fevers and respiratory diseases in children. Another study has shown that children are more likely to receive antibiotics for acute respiratory illnesses if they have received a telemedicine consultation than if they have presented to an urgent care centre or to a paediatrician’s office. This, Dr Teller concluded, is another area where veterinarians could be informed by the experience of human medicine.

Privacy notice: This site uses cookies, which we use to improve your experience, and not for marketing purposes. If you continue we'll assume you are happy to receive them. Read our cookie policy
Future of the professions debate