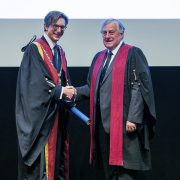 We have launched two new awards for veterinary surgeons or veterinary nurses who are making a tangible positive impact on the profession and who are inspiring others by their example.

The RCVS Inspiration Award is for a veterinary surgeon or veterinary nurse who has demonstrated the ability to inspire and enthuse others consistently throughout his or her career. It is open to those who have inspired and motivated individuals or groups or who have worked at a profession-wide level. The award would recognise those who have gone ‘above and beyond’ what may normally be expected from a professional colleague or tutor.

The RCVS Impact Award is for a veterinary surgeon or veterinary nurse who has made a considerable impact that has affected the profession at large, animal health or welfare, or public health. Such impact could have been made through any field of veterinary endeavour, including clinical practice, research, education or veterinary politics.

Chris Tufnell (pictured rewarding the Queen’s Medal to Dr Barry Johnson), Senior Vice-President of the RCVS, said: “I am very excited to be introducing these two new awards for those veterinary surgeons and nurses who go above-and-beyond the call of duty for the benefit of their profession, animals and society as a whole.

“I am keen to emphasise that these two new awards are relevant for veterinary professionals from all walks of life and any stage of their career – these are not life-time achievement awards but are for those making a tangible difference whether that’s in their practice, their region or across the country as a whole.

“If you know someone like this then I would strongly encourage you to find out more on our website and fill out a nomination form.”

Furthermore, at RCVS Day 2017, we also introduced our inaugural International Award for individuals who have worked internationally, from either within or outside the UK, to safeguard and improve animal health and welfare. The International Award this year went to Christophe Buhot, former President of the Federation of Veterinarians of Europe.

Nominations for all six honours are now open and the nomination forms and guidance forms are available to download.The deadline for making nominations is Monday 16 October 2017.

All nominations will be considered by the Operational Board for approval by RCVS Council at its March 2018 meeting. Awards will be made at RCVS Day in July 2018.

Those with questions about making a nomination can contact Peris Dean, Executive Secretary, on p.dean@rcvs.org.uk

Privacy notice: This site uses cookies, which we use to improve your experience, and not for marketing purposes. If you continue we'll assume you are happy to receive them. Read our cookie policy
Ethics Review Panel trial extended and remit expanded

The global profession, career diversity and innovation in focus at RCVS Day...
Scroll to top